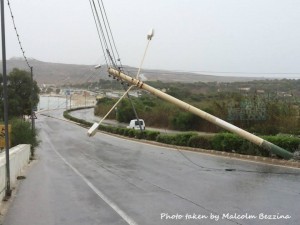 A strong thunderstorm caused by a supercell moving eastwards from Tunisia affected the Maltese Islands during the early afternoon with heavy rainfall, small hail, strong Force 9 to 10 microburst winds and dangerous lightning. Highest wind gusts were Nadur 86.9km/h and Burmarrad 85.3km/h, and a boat in Mellieha reported a gust of 94km/h. There was also an unconfirmed report of a possible funnel cloud.

In Cirkewwa, a canopy was blown off and hit some cars. A lamp-post was also wrenched off a wall near the Regional Road in San Gwann. Another three lamp-posts were dislodged in Marfa Road, Mellieha. Low-lying areas, particularly Msida, suffered road flooding. Traffic in many areas was reduced to a crawl. A number of trees were uprooted, causing more driver misery.

Nine children also had to be rescued from the sea when a number of small sailing boats capsized after being hit by a wave. The incident happened off Sirens pitch in St Paul’s Bay as the thunderstorm and strong winds suddenly hit Malta.